So I spend a lot of time putting watchlists together, but you may wonder how I use them. 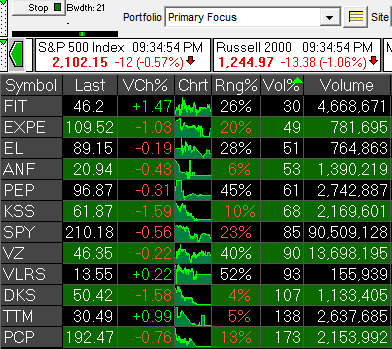 – grand idea is to stack odds in my favor by putting perceived best ideas in front of my face when the bell rings
– always seeking continuation of trend, reversal trades are like kryptonite for me
– those above a 50day sma are longs & vice versa for shorts

A given stock starts moving, then what?

– generally avoid gaps, especially sizable ones, at least until an hour or so has past
– want to see an impulse of between 1 & 3% in planned direction, accompanied by good relative volume
– less than 1% I feel is likely ambiguous move, and over 3% I may be chasing/late
– sit & wait for 15min opening range break, then pounce
– can use mid point of opening 15min bar as a stop

– get rid of noise..within 30mins I’ve eliminated ideas that didn’t move in planned direction, or equally important: have lackluster volume pace
– consult secondary watchlists..these are stocks whose setups I like but didn’t think they’d trigger quite yet..sort them by highest percentage of average daily volume & bring over the movers to focus list

Later, when seeking additional action, I turn to several custom Trade Ideas scans, as well as my filtered view of twitter. At the same time, I’m always keeping tabs on Keith’s chat. Seems like everyday, he nails something big.

This entry was posted in watchlist. Bookmark the permalink.